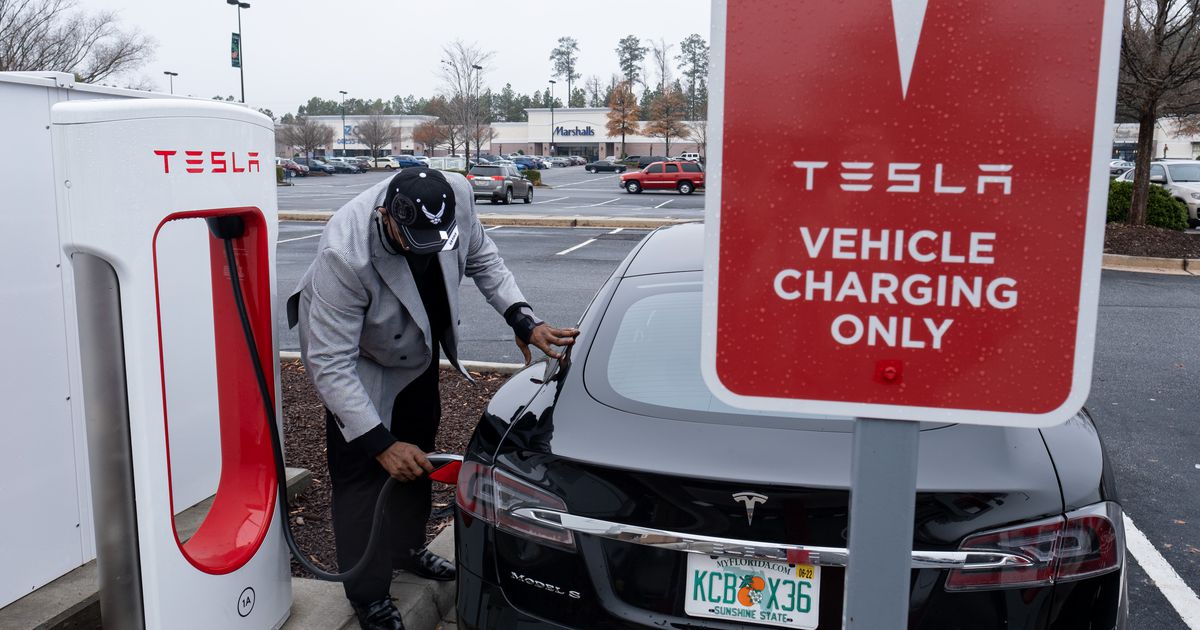 Georgia has 1,500 EV charging stations, seventh out of 50 states and the District of Columbia. Metro Atlanta has about 1,110 of them, the third-highest among U.S. metro areas, according to real estate data provider Yardi Matrix.

Outside Atlanta, good luck. On I-16 between Macon and Savannah, a 170-mile stretch, drivers pass only four charging stations just off the interstate, according to the website PlugShare.

Vanessa Miller, an attorney in Detroit who advises automotive companies on supply chain issues, said a chicken-or-egg situation is holding things back.

“It’s hard to get the momentum you need because a driver isn’t going to buy an EV until they know they can keep it running,” she said. Companies won’t install more charging stations “because you don’t know how many EVs there are going to be.”

Kemp has made EV a priority, forming an EV task force in July to “ensure that our state is positioned to continue leading the nation in the rapidly growing electric mobility industry.” The group’s report may be released in early 2022.

Marshall Norseng disconnects his Tesla from the charger before his commute to Duluth at his Atlanta home Tuesday, November 7, 2021. STEVE SCHAEFER FOR THE ATLANTA JOURNAL-CONSTITUTION

Marshall Norseng disconnects his Tesla from the charger before his commute to Duluth at his Atlanta home Tuesday, November 7, 2021. STEVE SCHAEFER FOR THE ATLANTA JOURNAL-CONSTITUTION

At Tesla, the largest EV maker, yearly revenue grew from less than half a billion dollars in 2012 to more than $30 billion last year. It reported its first quarterly profit this summer. Rivian’s November IPO valued the company at more than $100 billion, more than either Ford or General Motors.

Governments have set lofty goals for converting to EVs in a push to combat climate change. President Joe Biden wants to cut greenhouse gas emissions by half from 2005 levels by 2030, in part by cutting the price of EVs by $12,500.

But there’s no guarantee EVs will become the dominant mode of vehicle transportation in the U.S., or at least not as quickly as some predict, Jeremy Michalek, head of the Vehicle Electrification Group at Carnegie Mellon University, wrote in a recent column for MarketWatch.

Ford, GM, Mercedes-Benz and other automakers with big EV plans may run into production problems that delay product launches or force recalls. Volkswagen delayed the release of its ID.Buzz electric microbus from 2022 to 2023. Chevrolet in August recalled all 141,00 Chevy Bolt EVs due to fire risks. Rivian warned in December it would fall short of its 2021 production target, sending its stock price lower.

EV sales have already captured the low-hanging fruit of consumers who are early adopters of new technology, Michalek said. Other customers may put up more resistance, especially if the price remains high. The gas-powered Hyundai Kona SUV starts at $20,950. The electric version starts at $34,000.

Mainstream consumers “aren’t as driven by environmental and technology-oriented lifestyles and have other priorities and constraints,” Michalek wrote.

California is tops with about 5.2% of all vehicles powered by electricity. In Georgia’s neighboring states, it’s exceedingly rare to see an EV on the road. In South Carolina, 0.5% of vehicles are EVs, and in Alabama it’s 0.4%.

The average range for all EVs is about 194 miles, according to EVBox. That’s not too far behind gas-powered cars, which can travel 300 miles or more before running on empty. And EV range is expected to keep climbing. Tesla models top 300 miles and Rivian vehicles are expected to have a range of at least 300 miles.

But unlike gas stations, many parts of Georgia are EV charging deserts. No charging stations are located along four-lane U.S. Highway 441 from McRae to the Florida state line, a 116-mile drive. That’s one mile more than the range for an electric Mini Cooper SE that is fully charged.

The dearth of charging stations has given rise to range anxiety.

Marshall Norseng drives his 2021 Tesla Model Y Long Range 50 miles a day commuting from his Midtown home to his Duluth office at Banyan Hills Technologies. His home charger provides enough juice to last two or three days and he’s never run out of power on the road.

Interstate travel offers a much-bumpier ride. On a recent trip to the Midwest, Norseng carefully planned his stops for recharges. Those stops turned out to be unlike a quick trip to a gas station.

“If you’re driving to the Midwest and you stop in Chattanooga at a charging station and they’re all full, you have to sit and wait,” he said. “You don’t have a choice.”

Some waits at EV charging stations can be royal time sucks.

A gas-powered vehicle typically takes fewer than 10 minutes to refuel. An EV plugged into a high-speed charger takes about 50 minutes. So-called Level 2 chargers, the most common type, can take six to 10 hours to recharge an EV.

“You’re not going to have people who are going to want to hang out at a rest stop for two hours waiting for their car to be recharged,” said Miller, the attorney.

Experts say that charge times will become less of an issue if there are more charging stations. An army of startup companies are competing to capture that market by selling to homeowners, local governments, retail establishments, hospitals, apartment complex owners and others.

SemaConnect has focused on placing Level 2 chargers in disadvantaged communities since they’re cheaper than fast-charging models, said Stephen Carroll, vice president of marketing. “Level 2 charging stations will be key to making EVs available” to those communities, he said.

The Bowie, Maryland, company declined to disclose the price of its Level 2 charging station, but said its at-home charger is priced at $699.

Cox Enterprises, owner of The Atlanta Journal-Constitution, owns a 4.7% stake in Rivian and supplies services to Rivian. Sandy Schwartz, a Cox executive who oversees the AJC, is on Rivian’s board of directors and holds stock personally. He does not take part in the AJC’s coverage of Rivian.

Other incentives are available. Georgia Power and Cobb EMC offer $250 rebates for the purchase of at-home EV charging stations and offer discounted rates to residential customers for overnight power if used to recharge EVs.

The state has encouraged the electric vehicle market on some occasions and has introduced impediments at other times:

But Georgia doesn’t make it easy for consumers to purchase EVs. State lawmakers blocked legislation that would allow EV makers to sell locally without going through a franchise dealer. Politically powerful auto dealers lobbied to kill the proposal. State lawmakers granted Tesla a waiver in 2015 letting it sell cars directly to consumers. In exchange, Tesla agreed to open no more than five stores in Georgia.

In 2015, Georgia lawmakers declined to renew a $5,000 tax incentive for EV purchases and added a new $214 yearly registration fee on top of the $20 yearly fee assessed on gas vehicles. Lawmakers added the EV fee to make up for owners not paying gasoline fuel taxes.

Buying a new EV is a case study in delayed gratification. Used Teslas and Nissan Leafs are being offered for sale around metro Atlanta. But if you want a fresh one from the factory, the wait for the cheapest Tesla sedan can be up to 10 months. Consumers must wait weeks or months for other EVs, too.

UItimately, if the potential Rivian manufacturing facility near Covington is to be successful, Georgia and the nation need to get things up to speed, said Miller, the automotive attorney.