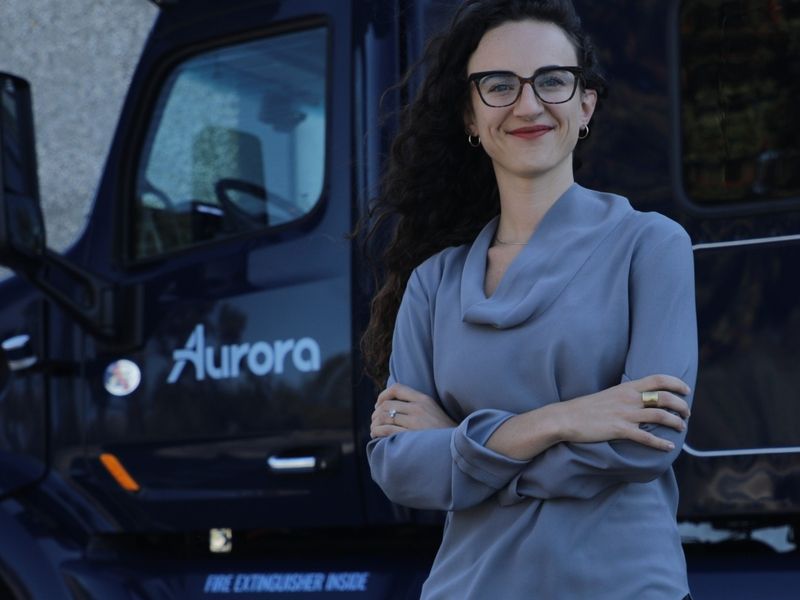 Lia Theodosiou-Pisanelli grew up in Toledo, Ohio — “in the shadow of the auto industry,” as she says. Her father is from Greece, and Theodosiou-Pisanelli spent many childhood summers with her family there. “That is what led me to be really interested in global policy and economics,” she says. “I find that I’ve always played this translator role — between my parents, between people from different countries and different worlds. It’s my sweet spot.”

It makes sense, then, that after she met Sterling Anderson, co-founder of Aurora Innovation, he and Aurora “crafted a new function for me,” says Theodosiou-Pisanelli.

Her title is vice president of partner products, programs and operations for Aurora Innovation. She explains: “I sit at the nexus of our engineering teams, our partners and our business teams, and also work on the government and regulatory side. For me, it’s the perfect spot. My job is to bridge the gaps between those groups. I’m grateful for their willingness to take a bet on me.”

After starting her career in government, working on international trade policy at the White House, Theodosiou-Pisanelli ended up first at financial-technology company Square and then entered the mobility world with a job at Lyft. “At the time I was there, Lyft was making the decision as a company to get into the autonomous vehicle space. We were asking: How do we offer the best mobility solutions to our customers?” she says. “Autonomous was an incredible catalyst to further the goals we had: to improve efficiency, safety, the entire customer experience. I was there to help build that strategy from the ground up.”

Now at Aurora Innovation, she says, “Although our company isn’t a traditional auto company, I have a lot of interactions with the traditional auto industry, the OEMs and our trucking partners. I’ve seen the role of women in the industry getting better even in the few years I’ve been here.

“But we can and need to do better. I’m glad it’s an ongoing conversation in the industry now.”

In 2020, Theodosiou-Pisanelli was named one of Automotive News’ 100 Leading Women in the North American Auto Industry.

She’s a leading woman in both the technology and auto industries — both traditionally dominated by men. She says it’s a familiar position. “My whole life I’ve been different from others I’ve worked with, and usually one of few women. In negotiating trade agreements, often I was working with other countries where the entire other side of the table was men,” she says. “I’m comfortable with it, but not necessarily OK with it.”

She says diversity and inclusion are critically important in business today, and it’s not just about making sure women are represented. “We need that diversity of perspective from people who have seen and experienced different things,” she says. “Certainly in the product development space, it’s really important to build a product that reflects a broad set of people, the people we are serving.”

To both women and other underrepresented groups, she says, “You deserve a seat at the table. Not despite the fact that you’re a woman, but because you’re a woman. It’s important to encourage women to be confident and participate.”

At the same time, she says, she tries to “focus on what I can control and be the best I can be so that I can create other opportunities and bring others along with me. What is it that I can be doing to make this better? What can I do to move the ball forward?

“If you think about everything that could be better, it can just be exhausting and pull you down. Focus on those things you have control over and push forward, work hard, think outside the box,” she says. “That to me is inspiring. It is a bias for action.”