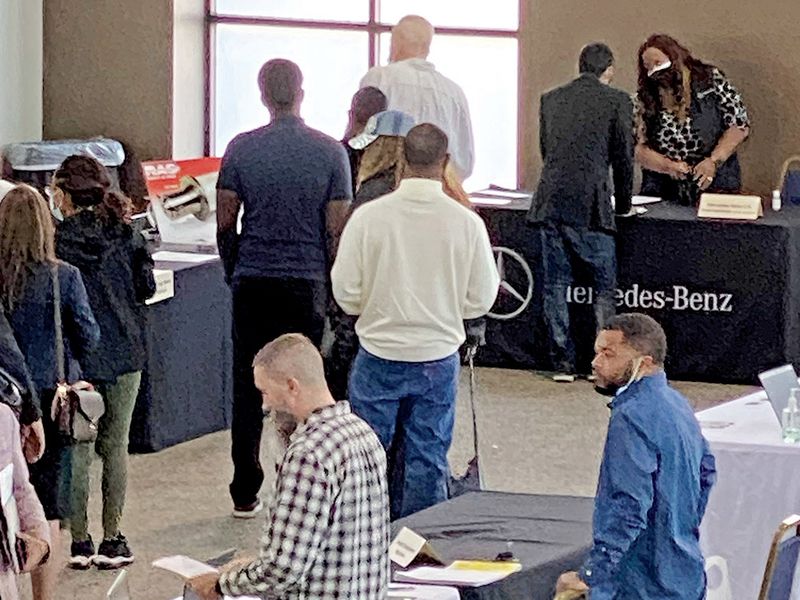 The question for many companies now is what to do to get workers back. And new ideas are popping.

Hiring bonuses have become common, with companies offering candidates $1,000 or more to take a job. Wybo said some of his clients have been paying as much as $5,000 in signing bonuses.

Cash bonuses to employees who recruit a friend or family member also are taking hold.

Mirror-maker Gentex Corp. in Zeeland, Mich., has begun offering equity in the company to recruit hourly employees, the first time it has ever done so, Chief Technology Officer Neil Boehm said. The offer is being well received, he said, “but we are still several hundred people behind where we need to be when the market comes back.”

In a bid to encourage more Hispanic job seekers, Gentex also has hit on the idea of designating Spanish-speaking assembly lines in its plants. “Before, they wouldn’t come and apply for a job because they didn’t speak English,” Boehm said. “We started on one line, and now it is on three shifts. It’s been very successful for us.”

Canning said Hoffer is promoting job openings on Facebook and Instagram. She also said that since people younger than 30 seem to live on their cellphones, the company’s human resources department texts them instead of calling to recruit.

She also is promoting Hoffer as a career “brand” — advertising the business as a family-owned company, with family values and integrity, where no workers have been laid off during the pandemic and where they can develop skills and save for retirement.

“I’m also over marketing here, and we are marketing ourselves to candidates,” Canning said. “This isn’t your grandfather’s old factory. It isn’t a dark, dirty place to go work. We are innovative in what we do and need for young people to understand what we offer.”

Hoffer has resorted to increasing its wages as well — twice so far this year — to $15 an hour.

Just how long the industry’s labor shortage will last is difficult to forecast. The situation has been somewhat overshadowed this year by the global semiconductor shortage. Because of the supply chain problem, automakers have been curtailing production off and on, which has reduced the pressure on suppliers and support companies to crank up their operations while they look for workers.

But the pressure will resume sooner or later, predicted Laurie Harbour, president of supplier consultancy Harbour Solutions. And when that moment comes, the industry will have to come up with still-better solutions to recruit workers.

Some smaller suppliers have used the semiconductor interruptions as opportunities to build up inventory, despite being understaffed, Harbour said. While customers are closed, some suppliers are steaming ahead to stockpile components — even if their lines have to run at slower speeds because workers are absent.

Wybo believes the current labor shortage will eventually be resolved but that hiring auto workers will remain a persistent, long-term challenge.

“It’s here to stay,” he said. “To deal with it, companies are going to have to get a lot more creative in the way they treat people and attract people. There’s just a lot more competition out there now for other jobs.”

Richard Truett contributed to this report.