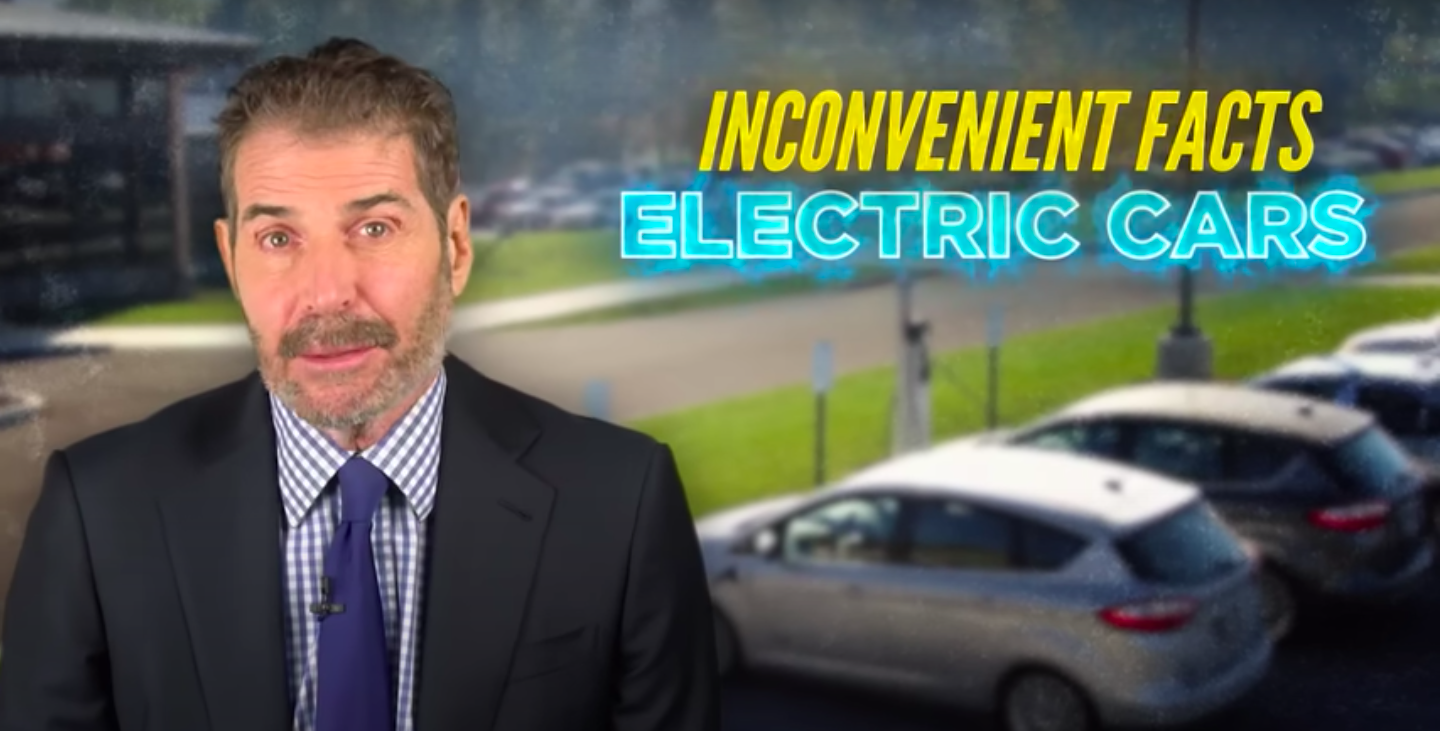 Politicians praise electric cars. If everyone buys them, they say, solar and wind power will replace our need for oil.

Here is the rest of my list of “inconvenient facts” about electric cars.

“The future of the auto industry is electric,” says President Joe Biden. He assumes a vast improvement in batteries. Better batteries are crucial because both power plants and cars need to store lots of electric power.

But future batteries will be better, I point out.

“Engineers are really good at making things better,” Mills responds, “but they can’t make them better than the laws of physics permit.”

“Because nature is not nice to humans,” explains Mills, “we store energy for when it’s cold or really hot. People who imagine an energy transition want to build windmills and solar panels and store all that energy in batteries. But if you do the arithmetic, you find you’d need to build about a hundred trillion dollars’ worth of batteries to store the same amount of energy that Europe has in storage now for this winter. It would take the world’s battery factories 400 years to manufacture that many batteries.”

This summer, California officials were so worried about blackouts they asked electric vehicle owners to stop charging cars!

Yet today, few of California’s cars are electric. Gov. Gavin Newsom ordered that all new cars must be electric by 2035! Where does he think he’ll get the electricity to power them?

Rationing. That means some places will simply turn off some of the power. That’s our final inconvenient fact: We just don’t have enough electricity for all electric cars.

Worse, if (as many activists and politicians propose) we try to get that electricity from 100 percent renewable sources, the rationing would be deadly.

“Even if you cover the entire continent of the United States with solar panels, you wouldn’t supply half of America’s electricity,” Mills points out.

Even if you added “Washington Monument-sized wind turbines spread over an area six times greater than the state of New York, that wouldn’t be enough.”

“It’s been an extraordinary accomplishment of propaganda,” complains Mills, “almost infantile…distressing because it’s so silly.”

Even worse, today politicians make us pay more for energy while forcing us to do things that hurt the environment. Their restrictions on fossil fuels drive people to use fuels that pollute more.

In Europe: “They’re going back to burning coal! What we’ve done is have our energy systems designed by bureaucrats instead of engineers,” complains Mills. “We get worse energy, more expensive energy, and higher environmental impacts!”

I like electric cars. But I won’t pretend that driving one makes me some kind of environmental hero.

“There’ll be lots more electric cars in the future,” concludes Mills. “There should be, because that’ll reduce demand for oil, which is a good thing. But when you do the math, to operate a society with five or six billion people who are living in poverty we can’t imagine, when you want to give them a little of what we have, the energy demands are off the charts big. We’re going to need everything.”

Dec 6, 2022 Tara
We use cookies on our website to give you the most relevant experience by remembering your preferences and repeat visits. By clicking “Accept All”, you consent to the use of ALL the cookies. However, you may visit "Cookie Settings" to provide a controlled consent.
Cookie SettingsAccept All
Manage consent